Visiting Peru? Top 10 Things To Do | Adventure Unbound
Skip to main content
Stretching from the snow-capped Andean peaks to the idyllic beaches of the Pacific coast, Peru is one of South America’s most captivating countries. It includes ancient ruins, picturesque colonial cities and vibrant indigenous communities, not to mention a dense tract of Amazonian jungle to explore. Whether you want to go trekking to remote Andean villages, feast at fine dining restaurants in the capital Lima or take to the air to experience Peru from above, here are ten of the country’s top experiences.
1. Explore the UNESCO-listed Ruins of Machu Picchu
Recently voted as one of the New Seven Wonders of the World, Machu Picchu boasts a spectacular setting within the Sacred Valley. It stands as Peru’s most alluring attraction, with its 15th-century ruins having remained hidden from the outside world for much of their existence. Join a guided tour to discover how Machu Picchu’s buildings were creatively constructed from stone, then climb the peak of Huayna Picchu for a completely different perspective on the “Lost City of the Incas”.
Getting to Machu Picchu is all part of the adventure, with the option to ride the train to the town of Aguas Calientes that nestles at the base of the site or embark on the legendary four-day Inca Trail. Experience the majesty of the Sacred Valley as you trek beneath its soaring peaks and past ancient ruins along what was once an Incan route. The popularity of the Inca Trail has seen numerous other treks to Machu Picchu developed in recent years, including the spectacular Salkantay Trail and the Lares Trek that takes you through remote Andean villages.
Trip Idea: Peru Unbound - Adventure to Machu Picchu & Beyond 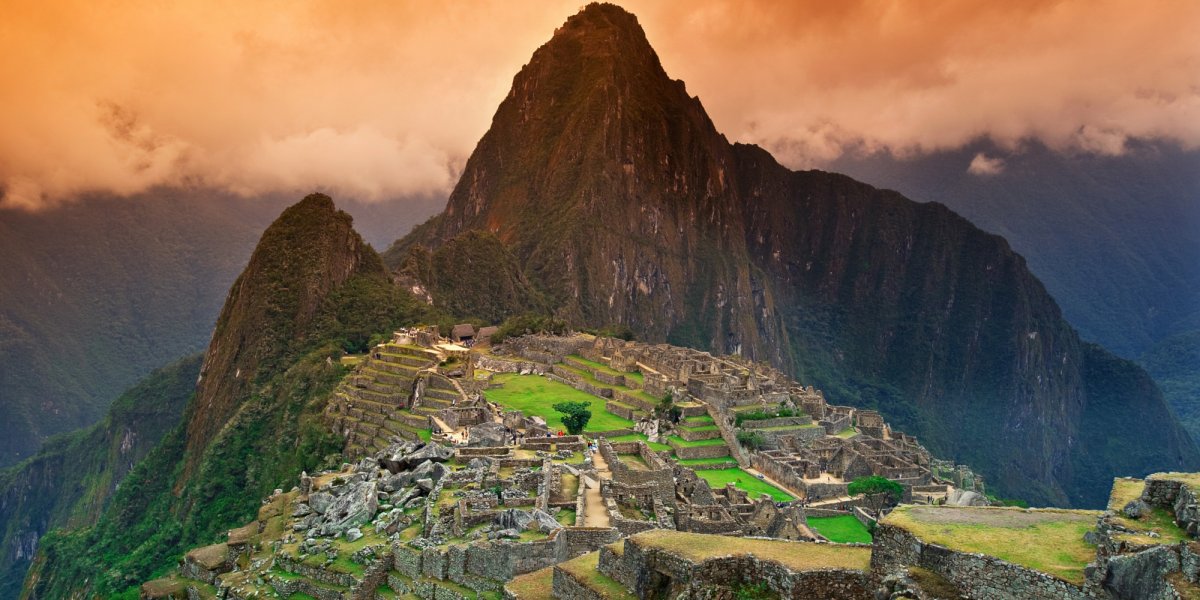 2. Fly Over the Nazca Lines
Drawn on an immense scale in the Atacama Desert, the Nazca Lines are a series of ancient geoglyphs that remain shrouded in mystery. Many believe they were created between 400 and 650AD by the Nazca people and have been naturally preserved by the dry desert climate. The best way to view the floral and faunal motifs of the Nazca Lines is from the air on a scenic flight, allowing you to truly appreciate the immensity of the designs and the incredulity of their creation.
Trip Idea: Peru Extension - Paracas & Nazca Lines 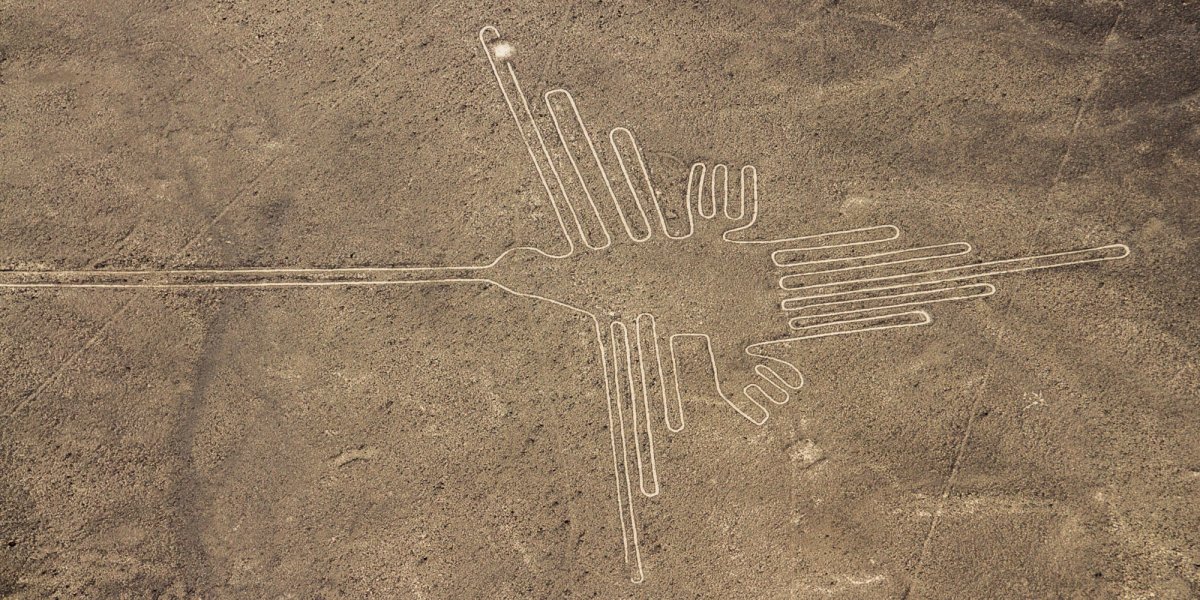 3. Visit the Islas Flotantes de los Uros
Lake Titicaca straddles Peru’s border with Bolivia in the magnificent Andes and stands not only as South America’s largest lake but also the highest navigable lake in the world. More than 70 islands dot the azure blue waters, making it an idyllic spot to explore by kayak.
Be sure to visit the artificial Uros Islands that have been constructed from woven tortora reeds that grow along Lake Titicaca’s shores and spend the night in a floating reed house with their indigenous inhabitants. Take a boat cruise to witness the fascinating Incan ruins on Isla del Sol and go hiking through traditional Quechuan and Aymara village backed by the snow-capped peaks of the Cordillera Real.
Trip Idea: Extension - Puno & Floating Islands at Lake Titicaca 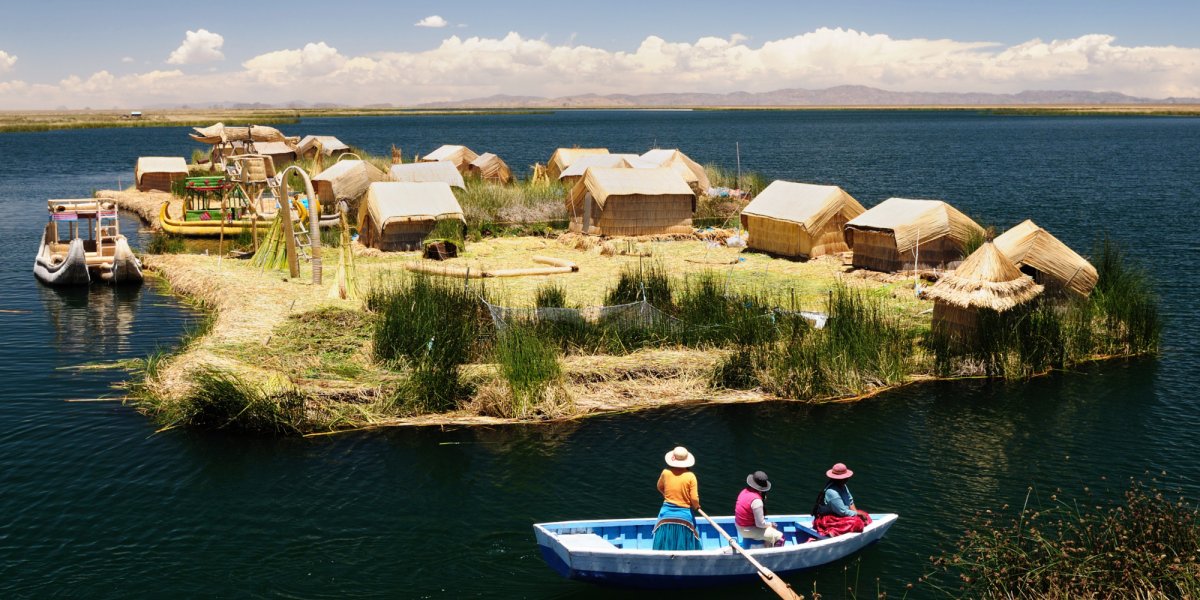 4. Watch Condors Soar Above Colca Canyon
One of the world’s deepest canyons, the awe-inspiring Colca Canyon is among Peru's top trekking destinations. Steep trails venture to the oasis-like canyon floor, with pre-Incan terraces blanketing the steep slopes and traditional villages dotting the way. Witness the ancient hanging tombs at Choquetico and Litomaquetas, bathe in the hot springs of Chivay and witness great Andean condors soaring on the thermals from the Cruz del Condor.
Trip Idea: Extension - Arequipa & Colca Canyon Explorer 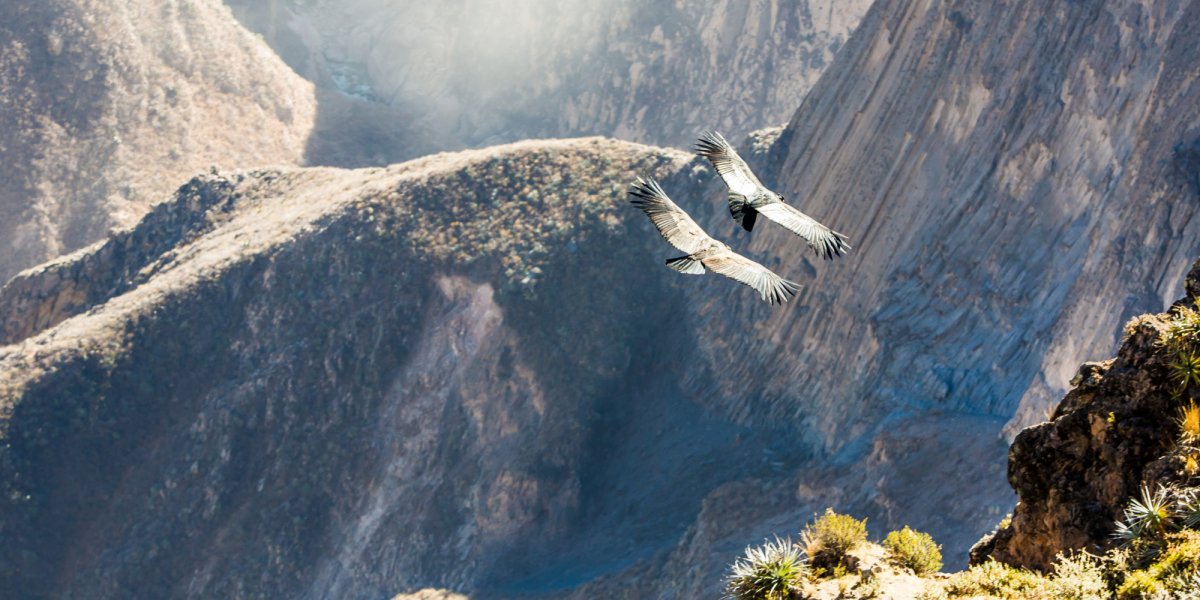 5. Discover the Allure of Cusco
Serving as the former capital of the Inca Empire, Cusco is one of Peru’s most charismatic cities. Spanish colonial-era buildings top the city’s ancient Inca ruins while the immense Cristo Blanco statue watches on from above. Wander the cobblestone streets that radiate from the central Plaza de Armas and explore the ruins of Sacsayhuaman that lie on the city’s outskirts.
Time your visit to experience the Inti Raymi “Festival of the Sun” that sees masked dancing and Quechuan feasting in the main plaza or coincide your trip with the annual Corpus Christi celebrations as saints and virgins are paraded to the Cusco Cathedral.
Trip Idea: Classics of Peru 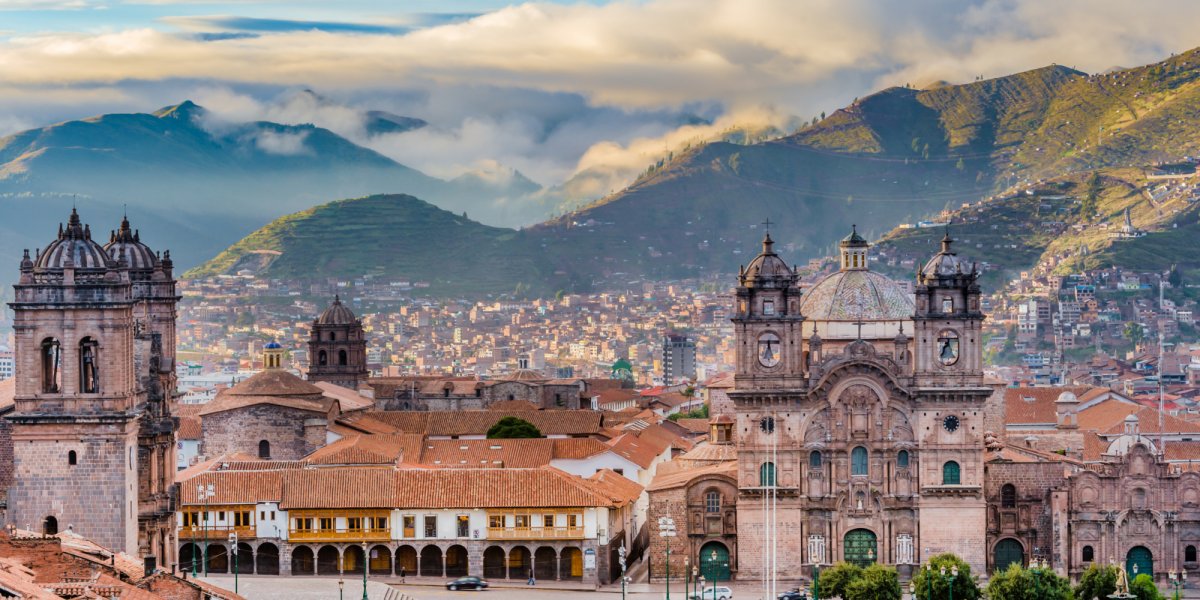 6. Venture into the Peruvian Amazon
Home to an incredible biodiversity within its magnificent tract of jungle, the Peruvian Amazon is a “must” for nature lovers. Chocolate-colored rivers carve through the dense rainforests of Reserva Nacional Pacaya Samiria and Parque Nacional Manu where jaguars, sloths, spider monkeys and a myriad of bird species can be found. Explore the vibrant markets of Iquitos which flourished following the early-20th-century rubber boom and cruise along the waterways to spot endangered pink Amazon dolphins, then bunk down in a jungle eco-lodge with the calls of the wild ringing all around.
Trip Idea: Peru Custom Tours 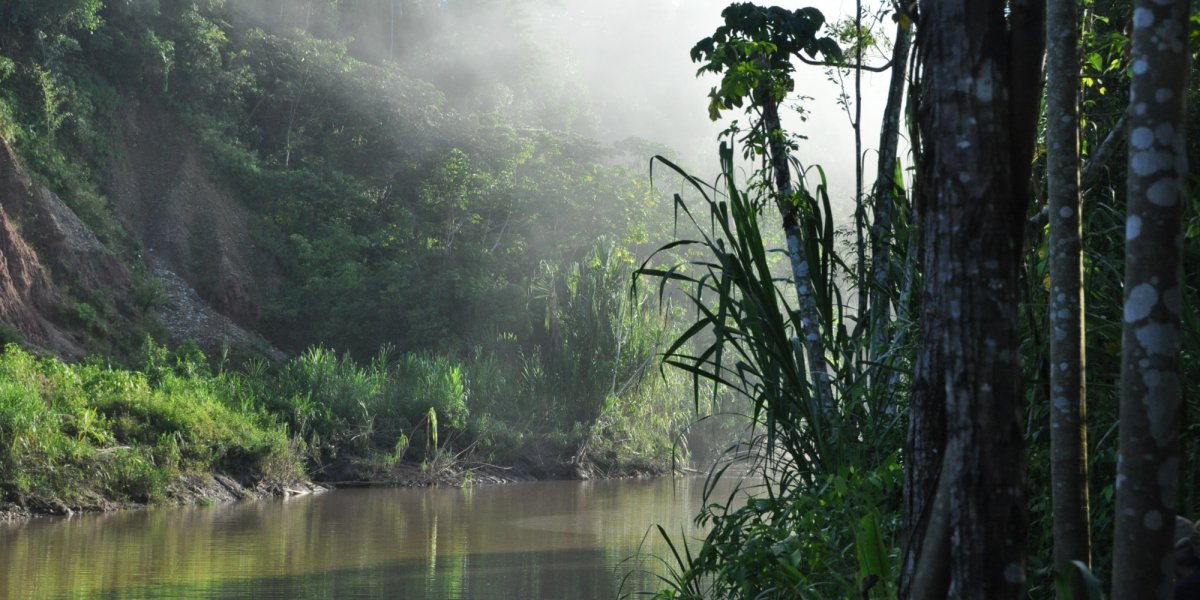 7. Wander the “White City” of Arequipa
Built using volcanic sillar stone, the whitewashed city of Arequipa is a UNESCO World Heritage-listed site with a charming historic center. Explore its elaborate Spanish colonial mansions and the atmospheric Convento de Santa Catalina, together with the 17th-century neoclassical Basilica Cathedral that features sacred works of art. Then wander across the Puente Bolognesi that boasts beautiful views towards the volcanoes of El Misti and Chachani.
Trip Idea: Extension - Arequipa & Colca Canyon Explorer 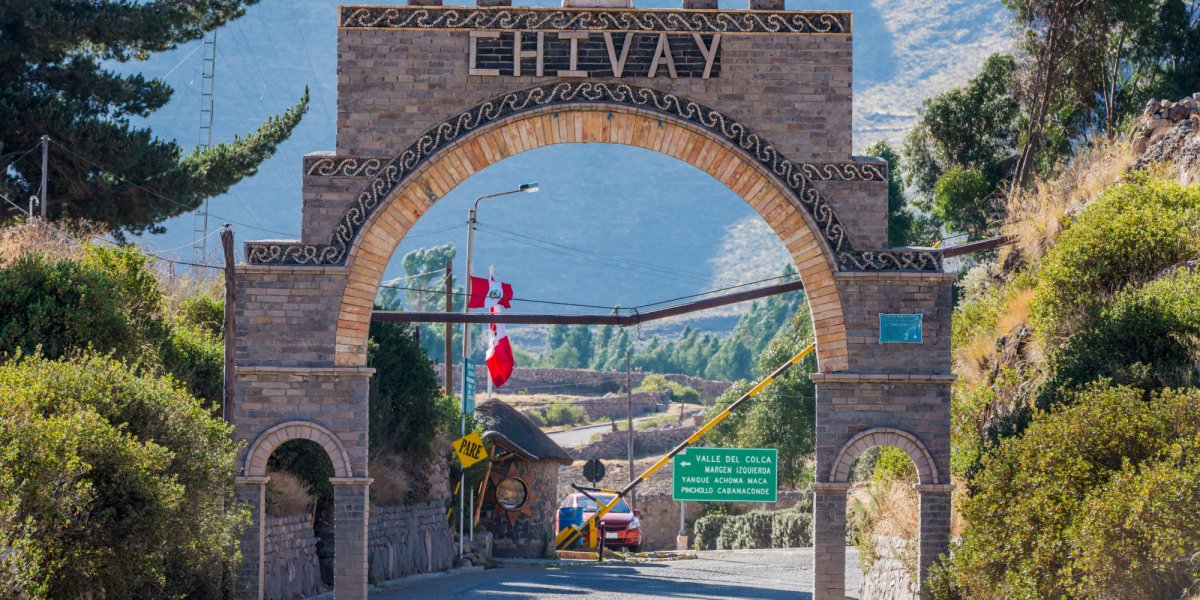 8. Experience the Buzz of Lima
Peru’s pulsing capital brings together fascinating museums and vibrant modern developments, as well as one of South America’s most iconic beachside suburbs - Miraflores. It boasts some of the country’s best restaurants, together with colorful markets that can be toured as part of Peruvian cooking classes. Discover the pre-Columbian artworks at the Museo Larco and delve into the ancient history of Peru at the Museo de la Nación, then venture north to explore the temples and pyramids of Caral that is one of the oldest civilizations in America.
Trip Idea: Traditional Peru 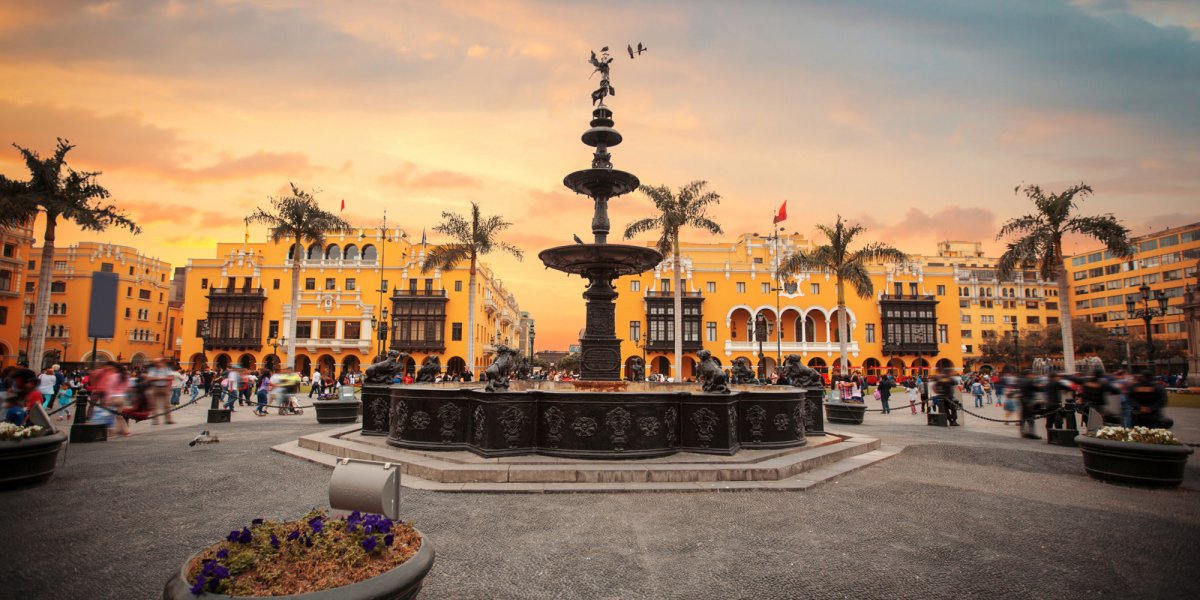 9. Explore the Ancient Ruins of Trujillo
With a pre-Incan history that dates back to the 1st century AD, Trujillo is renowned for its beautifully preserved colonial architecture. This northern hub makes a great base for visiting the sacred Moche sites at Huaca de la Luna and Huaca del Sol, as well as the burial chambers and temples at UNESCO-listed Chan Chan, the former capital of the Chimu people.
Trip Idea: Extension - Trujillo & Chiclayo Explorer 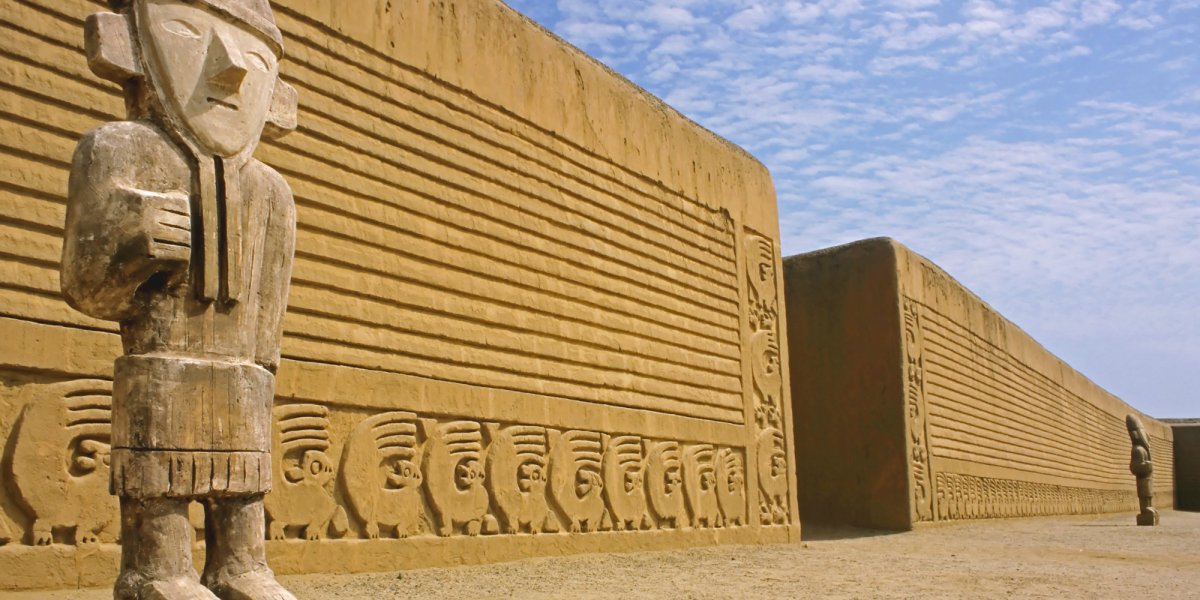 10. Eat Eat Eat!
Bringing together ancient Incan ingredients with elements of Spanish gastronomy, Peru has one of the world’s most enticing “fusion” cuisines. The country is renowned for its mouthwatering ceviche and rich aji de gallina, together with Chinese-influenced dishes like lomo saltado. Feast on creamy shrimp chowder (chupe de camarones) and delicious causa, together with a few unique Peruvian delicacies such as alpaca and guinea pig! Wash it all down with an Inca Kola or pisco sour and you’ll understand why Peru is a foodie’s dream.
Trip Idea: Peruvian Culinary Adventure 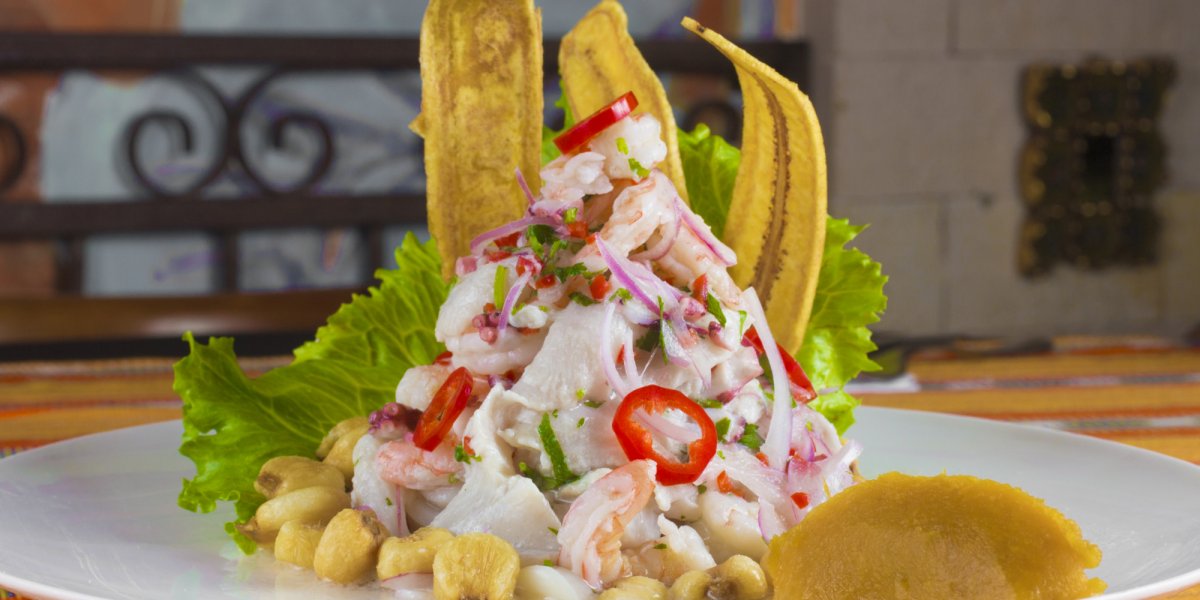