Top 15 Foods to Try While in Quebec, Canada
Skip to main content

While it has strong roots in French cuisine, Quebec’s food scene has been shaped by the successive waves of immigrants who have made this Canadian province home. Many of its dishes hark back to the harsh years of early settlement while others are deeply rooted in cultural traditions.

As a result, Quebec is emerging as a foodie destination and there are several dishes you just HAVE to try. For anyone joining one of our Quebec Tours, we highly recommend a day or two added to your trip to simply taste your way around Quebec. 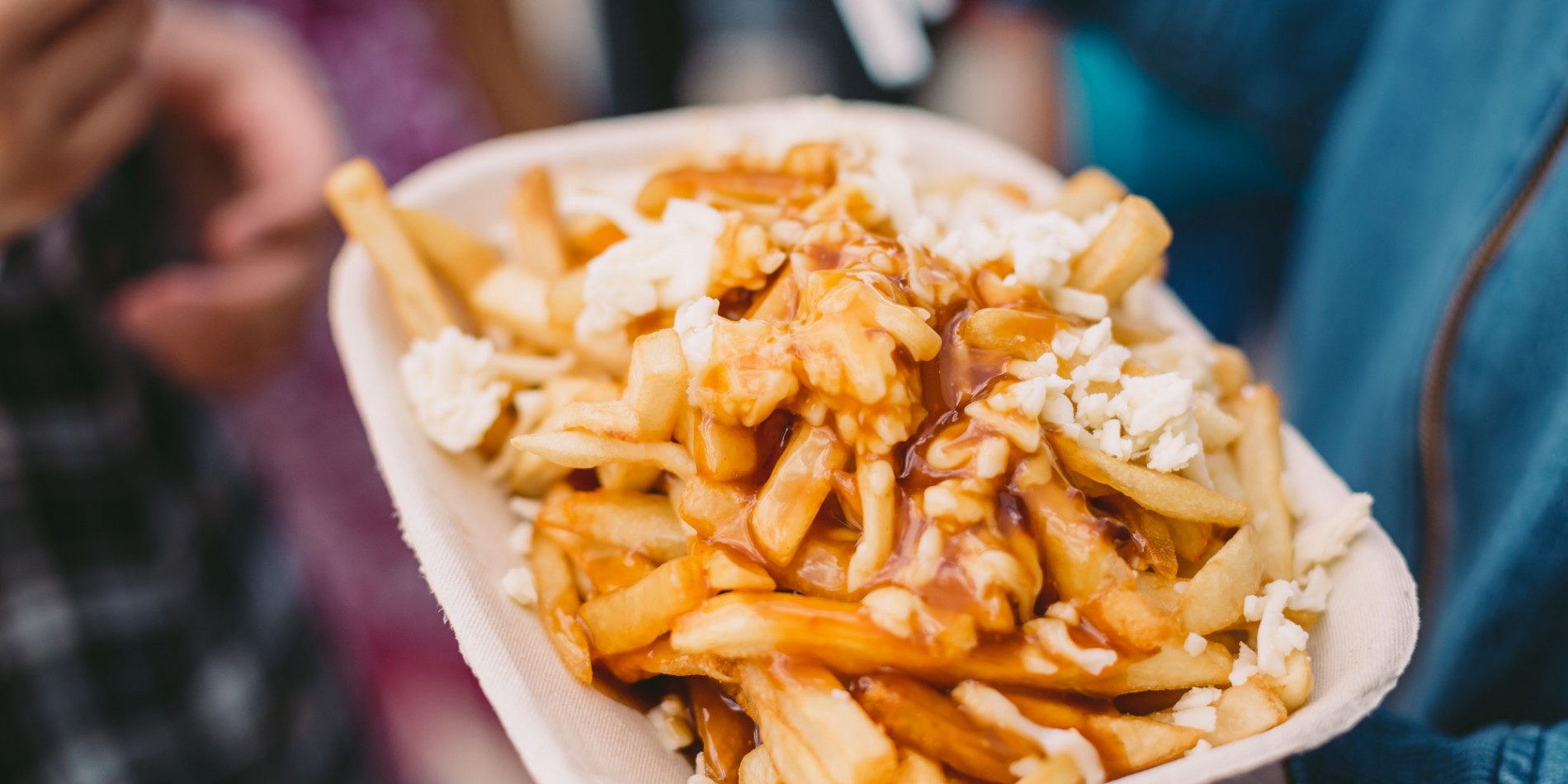 Poutine is perhaps Quebec’s signature dish, consisting of French fries topped with cheese curds and a rich, brown gravy. It is said to have been invented in the dairy farming town of Warwick in 1957 when a customer requested French fries and cheese curds to be served together. When looking at the dish, he described it as “poutine”, the Quebecois slang for “mess”.

Today, you can find poutine at roadside trucks in city streets and along highways, as well as at restaurants where it has been given a gourmet twist. In some cases, you’ll find toppings like pulled pork, chorizo, or foie gras for something a little different. If you really want to be immersed in the world of poutine, coincide your visit with Poutine Week, which takes place across Quebec each February. 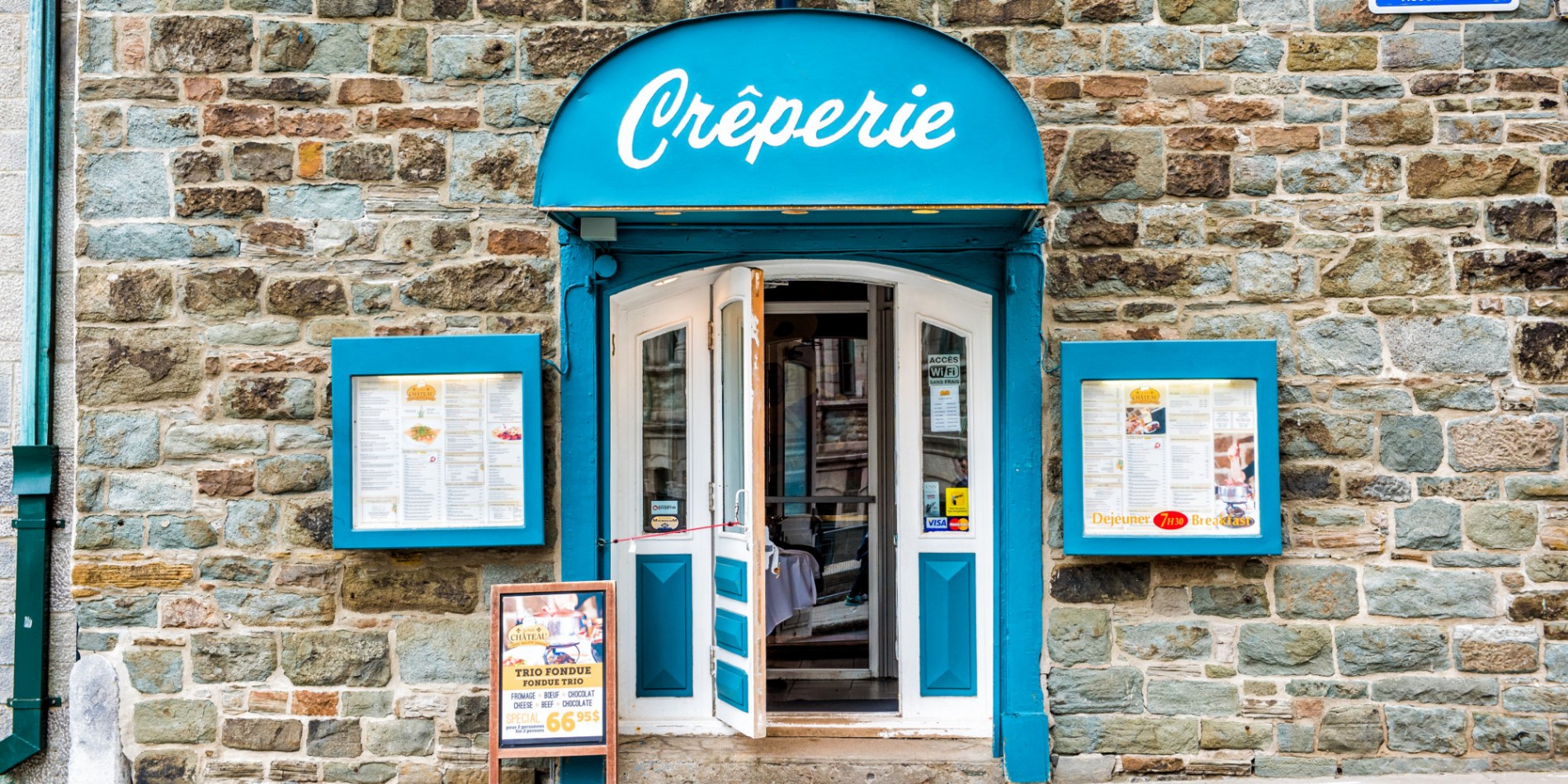 Crêpes are thin, paper-like pancakes that have long been common throughout France and Belgium. They arrived in Quebec with French explorers but are often slightly thicker in Canada than their European counterparts. Quebecois crêpes are traditionally made with milk, flour, and eggs and cooked on a billig before being transformed into both savory meals and sweet desserts.

Bagels are an integral part of Montreal’s food scene and were first brought to the city by Canada’s Jewish immigrants. They are smaller and denser than those found in New York, with many claiming they are better than their U.S. counterparts. While exploring Montreal, you’ll find countless spots specializing in bagels, with many baking them over a wood fire within view of the dining area.

Another Montreal delicacy that the Jewish community can be thanked for is smoked meat, a beef brisket that has been cured with spices. While there are several delicatessens located throughout the city that serve rye bread topped with smoked meat and mustard, the most iconic is Schwartz’s Montreal Hebrew Delicatessen, which has been slicing meat since 1928. Their secret? A 10-day curing time and a brick smokehouse with 80 years of service that only adds to the flavor. 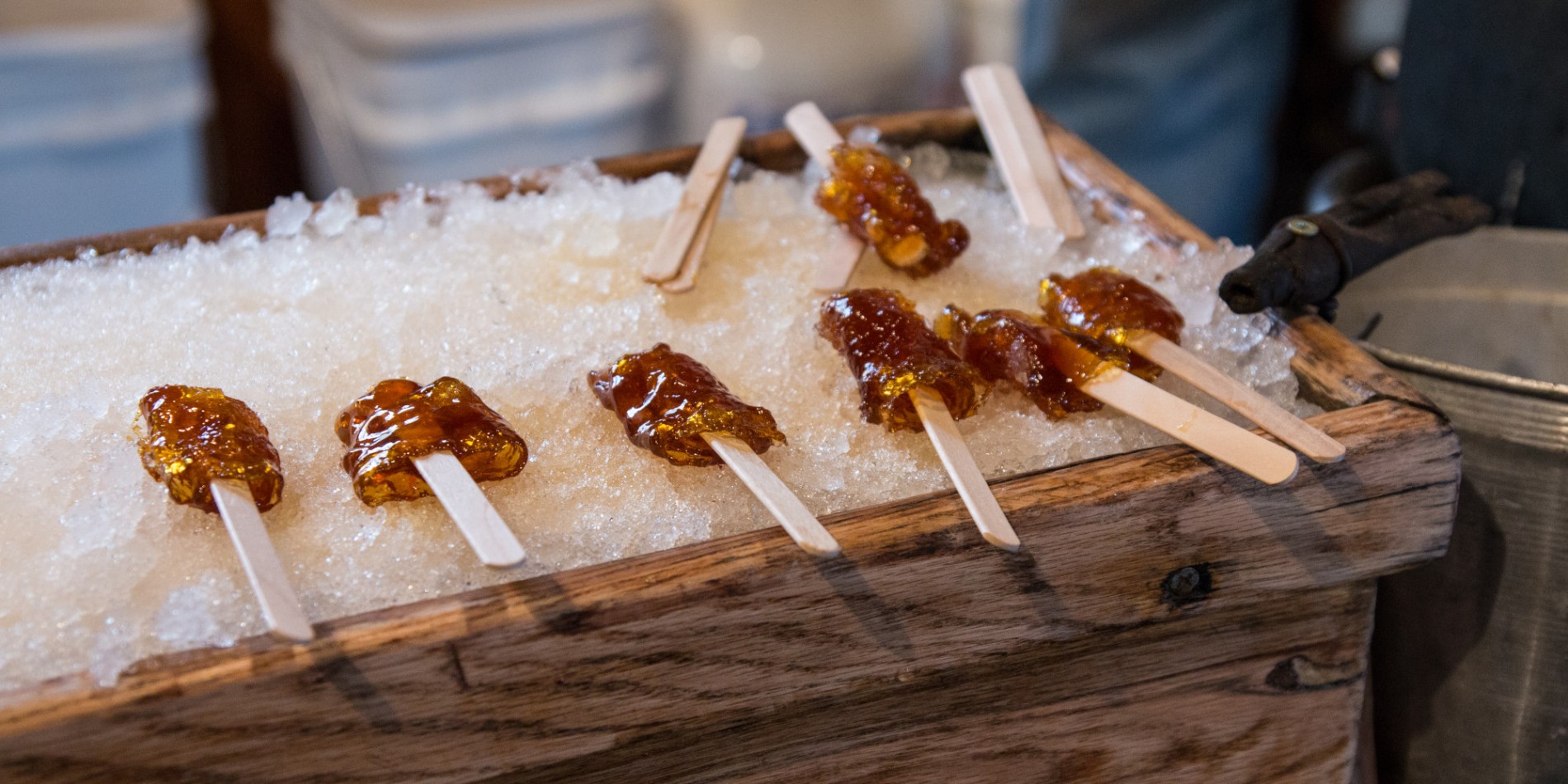 Tire sur la neige is a taffy that is formed by pouring hot maple sap directly onto fresh snow, creating a soft candy that’s designed to be eaten straight away. It’s found at sugar shacks throughout Montérégie and Laurentians and feasting on this sweet treat is an essential part of any visit. Sugar shacks are also great places to discover how maple syrup is produced and many have restaurants that highlight traditional Quebec dishes.

Cheese lovers will rejoice in Quebec, with the province so renowned for this beloved dairy food that it has an entire Route des Fromages dedicated to it. It takes you to some of the region’s top producers and merchants where you can learn how cheese is made and sample Quebec’s unique varieties. What makes Quebec’s cheese industry particularly noteworthy is its production of young, raw-milk cheeses, with these soft varieties having been aged for less than 60 days. If you’re short on time, head to the Eastern Townships, which boasts a high concentration of cheese producers and locavores.

One of Quebec City’s most famous dishes is tourtière, a traditional meat pie that is a staple of Christmas reveillon and New Year’s Eve meals. They are usually filled with minced pork, veal, or beef and potatoes, although wild game is also sometimes used. If you’re visiting the coastal parts of Quebec, you might even find tourtières with salmon while Lac-Saint-Jean’s version is renowned for having a thicker crust. In fact, it is here that the tourtière is said to have originated when Quebec was still a French settlement.

Montreal is one of the world’s largest Francophone cities and has drawn immigrants from across the French-speaking world, including those from North Africa. So it should come as no surprise that Moroccan, Tunisian and Algerian dishes are wildly popular throughout the city, particularly in the Plateau Mont-Royal area. Couscous is one that has really taken off, with these steamed granules of durum wheat semolina topped with a spice-infused stew of meat and vegetables. Look out for one of the many “couscouseries” that have sprung up across the city.

Montreal’s Haitian community is also thriving and has made its mark on the city’s culinary scene with tassot. This classic Creole dish features goat or beef meat that has been marinated with onions, orange, and lemon juice before being fried to a crispy brown. Tassot can be found at Haitian and Caribbean restaurants throughout the city and is often served alongside rice and fried plantains.

Known locally in Quebec as soupe à l’oignon, this soup is said to have originated in 18th-century Paris, although others claim that some version of it has been around since the Roman Empire. It’s traditionally made using beef broth and caramelized onions that are topped with croutons and melted cheese. In Quebec City, you’ll find plenty of variations, with red wine or ale often added to the broth and croutons replaced by baguettes, as well as a huge variety of different cheeses.

Another popular Quebec soup is based on peas (dry yellow peas, in fact), with salted pork and vegetables added to the mix. It is believed to have been introduced to Quebec by the French explorer, Samuel de Champlain, around 400 years ago. Soupe aux pois is such a part of the province’s culinary tradition that most families have their own recipe. It is also a staple on the menus of sugar shacks and is often served during the holiday season.

Similar to French rillettes, cretons is cold meat that’s made with ground pork, onions, and spices, plus pork marrow to help it congeal. It used to be popular amongst French Canadians working out in the woods and is now a staple on the Quebecois breakfast table. Locals love to spread it on toast in the morning, sometimes with a dollop of maple syrup.

As its name suggests, this single-crust pie is sinfully sweet and is made using cream, flour, egg, and brown sugar or (occasionally) maple syrup. It’s thought to have originated in the dessert pies made by early French and Belgian immigrants but has more of a grainy texture than those of its European counterparts. Tarte au sucre is available at supermarkets, bakeries, and restaurants throughout the province.

Bûche de Noël is a log-shaped cake that’s an integral part of any Quebecois Christmas feast. It’s thought that the yule log tradition started in the 12th century when a log sprinkled with oil and wine was burned to ward off evil spirits. By the 19th century, it had been transformed into an edible form by the French. At its most traditional, bûche de noël is a sponge cake that’s filled with buttercream and rolled, although chefs are constantly experimenting with different flavors to make it their own.

Known as tablet in Scotland, sucre à la crème is a decadent Quebecois treat that is made simply using sugar and cream (sometimes with a little butter and vanilla). Unlike fudge, it often has a grainier texture and is the perfect treat for those with a sweet tooth.

Michelle is the Assistant Director of Marketing for ROW Adventures, Sea Kayak Adventures and Adventure Unbound. 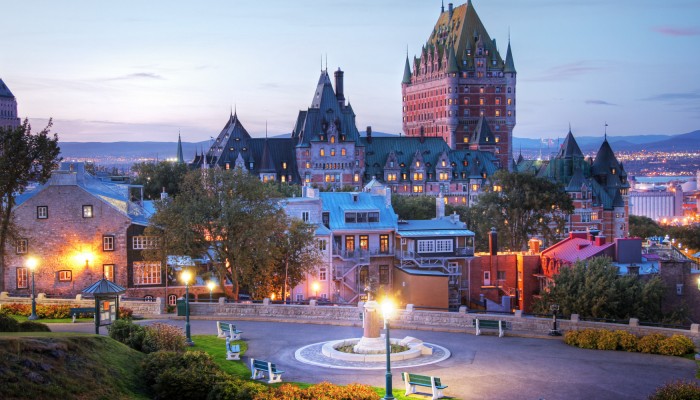 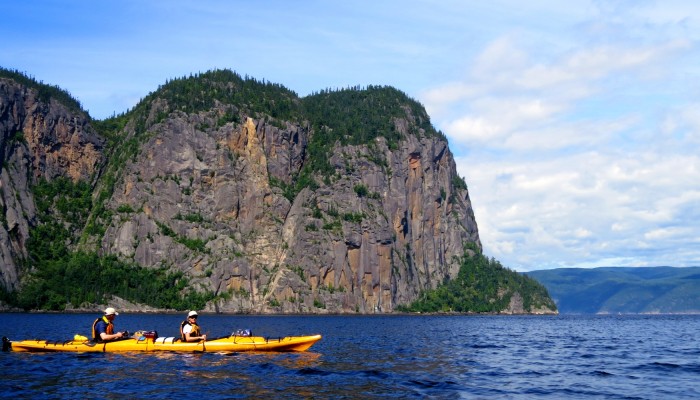 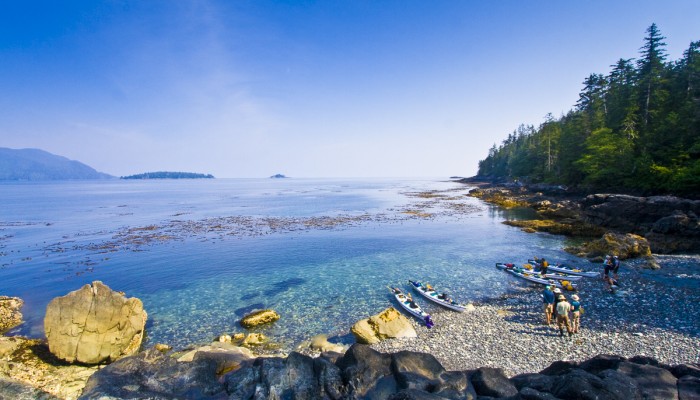 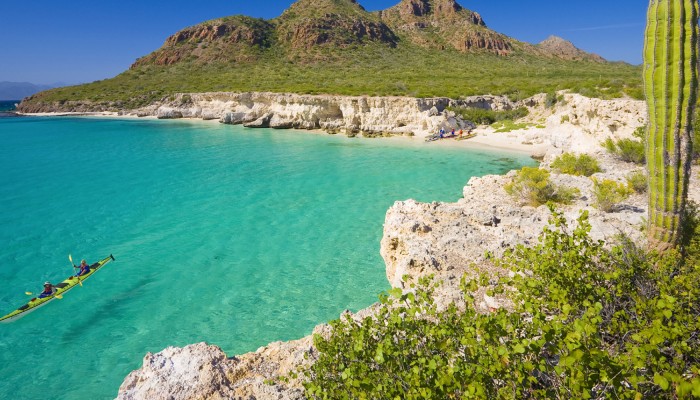 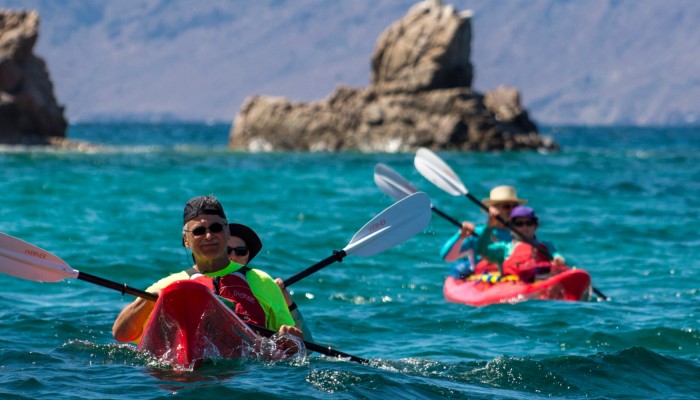 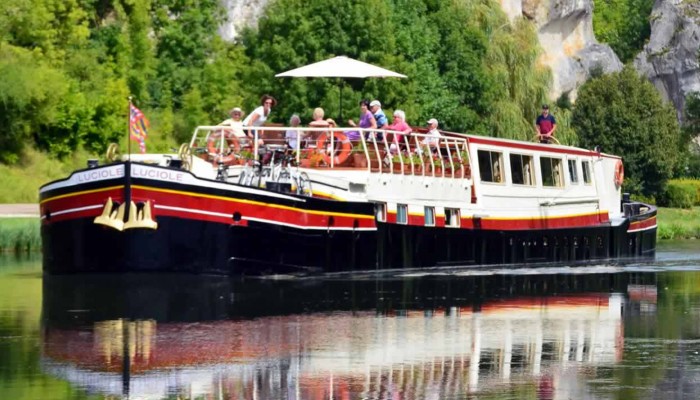 Cruising the Nivernais Canal in France